Hi! I got my first round of fat trolling on YouTube this week! As a person, it’s a little creepy and depressing. But as an online aggression researcher, it’s kind of awesome! I wasn’t trolling for trolls, I was just drooling over my latest favorite drag queen’s music video. Ginger Minj very nearly became America’s first fat Drag Superstar. She didn’t win the crown, but she’s super popular and released a video wearing a tee with her self-hashtag, #glamourtoad. So awesome. Anyway, I watched the video and posted in the comments that I really wanted one of those shirts. Enter troll. He/She spread the love far and wide, but here was my  little bit of the action:

The troll was posting under the name “discount demi” at the time he/she posted, but later changed his/her name to “horse renoir”. Weird; just keep in mind it’s the same person.

There were lots of other comments that were disparaging of Ms. Minj and her fans.

This is pretty normal fare in my area of research. I’m not looking at the hardcore, violent stuff, just run of the mill nastiness and passive aggression. This particular troll did a hit and run, leaving several nasty comments, and didn’t follow up on any of the responses.

What was interesting for me was trying to walk my own talk. I wanted to hit back, hard. I could say something really intellectual and superior or something nasty and witty…but here’s the thing. The troll had some need which he or she fulfilled by attacking fans of Ms. Minj, particularly due to his/her distaste for Ms. Minj’s body type. Reading the troll’s comments made me seriously annoyed; the troll made him/herself a prime target for my aggression and frustration with fat discrimination and those who rationalize and defend it.  But, projection (which is what I’d be doing if I hit back with an equally nasty comment–I would be projecting my accumulated frustration on one lonely troll) just keeps on bouncing back and forth like a ping-pong ball. So, knowing what I do about defense mechanisms and online discourse, I decided to take a deep breath, and think about how to respond. What could I say that would help me not feel victimized (the popular stance, “Don’t feed the trolls” doesn’t cut it for me) but not fall into an aggressive or passive-aggressive trap? So I did this: 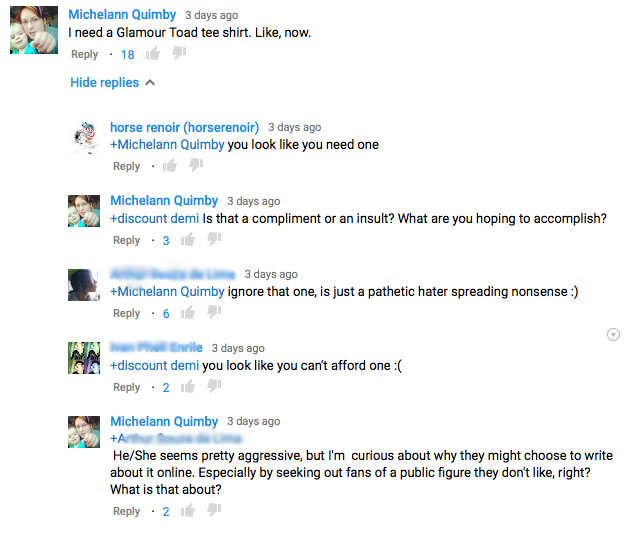 I felt better. I didn’t hit back, but I also didn’t roll over. It felt like the right response. It was hard! I have a heavy streak of passive-aggressive, which, coupled with some expert rationalization, can make it mighty hard to think of some way not to be bitchy when I’m attacked. My requirement for myself in responding was to only use adaptive defense mechanisms.

It was really interesting was seeing how others responded. One person counter attacked the troll, possibly on my behalf, while the other seemed to be coaching me on how to deal with the trolling. So what is going on in this community? As an avid of RuPaul’s Drag Race, I often get my post-season fix by watching videos posted by the performers, many of whom are quite prolific. This is a pretty typical comment thread on YouTube, particularly if the poster is fat. While I’m not actively seeking interaction with trolls, I’ve decided to be less inhibited in posting on YouTube pages a form of appreciation.

As in the previous post where I interacted with a troll, my response seemed to have a constructive effect on the other viewers, at least to the point that several were motivated to “like” my comment, interact with me, or defend me. To get all psychodynamic about it (again), I was operating at the adaptive defensive level by using sublimation  – consciously redirecting my ire and hurt into inquiry. The troll was operating at the immature level by acting out through making unsolicited disparaging and critical comments. The commenter who told me to ignore the troll was perhaps operating at the neurotic level by using reaction formation–partially expressing anger towards the troll by indirect name calling (“pathetic hater”) while coming to my defense.

Aggression is a Sensation

I’m taking a phenomenology class right now, which is a bit hard to explain, but it’s about doing research from inside the thing you’re studying, instead of observing it from the outside. So I’ve spent a lot of time over the past few weeks trying to describe my experience of aggression from multiple angles. One of the things that has been most interesting is how incredibly physical it is. Even just hearing someone speak cruel words, or reading them online has a physical effect. Have you ever felt like someone knocked the breath out of you, verbally? Or punched you in the stomach–verbally? Or dumped ice water down your back–verbally? None of those feelings are exactly like the descriptions, but they’re something like them. Reading the troll’s comment felt a bit like that. It made me really angry, and I wanted to punch him/her in the face–verbally.

I’m good with words. I’m also good with denial. A year ago, I might have written a really scholarly, academic sounding response that was the verbal equivalent of skewering the troll on a BBQ fork while convincing myself I was being perfectly civil. But after this year of studying online conversations and testing my assumptions about them, I know how that would likely go. Others would join in on the flaming, or the troll might fire back in some extra creepy ways, or I might just not say anything (thinking I was taking the high road) but doing that would leave me with some free-floating hurt and anxiety that would end up directed somewhere less appropriate. I might react disproportionately to my daughter’s behavior, or snap at my husband. Not that those things don’t happen–I just don’t want them happening because I wimped out on confronting a troll on YouTube. Right? The funny thing was that after I responded, my body relaxed. I didn’t feel creeped out anymore, and I didn’t feel any dread about how the troll (or others) might respond. I felt calm and curious. The quality of my aggression went from jagged and painful, to quiet and watchful. I was still mad, but not unsettled. My curiosity about how my comment would be taken was much stronger than my anger.

Can We Manage Our Engagement with Online Aggression? Should We?

I suspect that I’m not the only person who can have a physical-emotional response to something I read on a screen. A number of my friends have disconnected from social media because they find it so unsettling. The norms of online society don’t seem to leave much room for talking about hurt feelings or uncomfortable sensations. I consciously chose to omit that my feelings were hurt, because I didn’t think the environment would be safe or welcoming. YouTube commentators do not equal group therapy. Nonetheless, there is some really interesting stuff going on, and not all of it is immediately accessible through reading comments. I wonder how, as a researcher, I can get at this stuff? Pondering.